Charged With A Crime? Are You Being Investigated? With 22+ Years in the Courtroom and 200+ Trial Verdicts, Ernesto Gapasin is an Experienced Court-Martial Lawyer Who Can Win Your Case.

CLICK HERE TO SEE TRIAL RESULTS FROM 2008 TO TODAY!!  Compare our trial results to any other firm, and you'll see the difference! 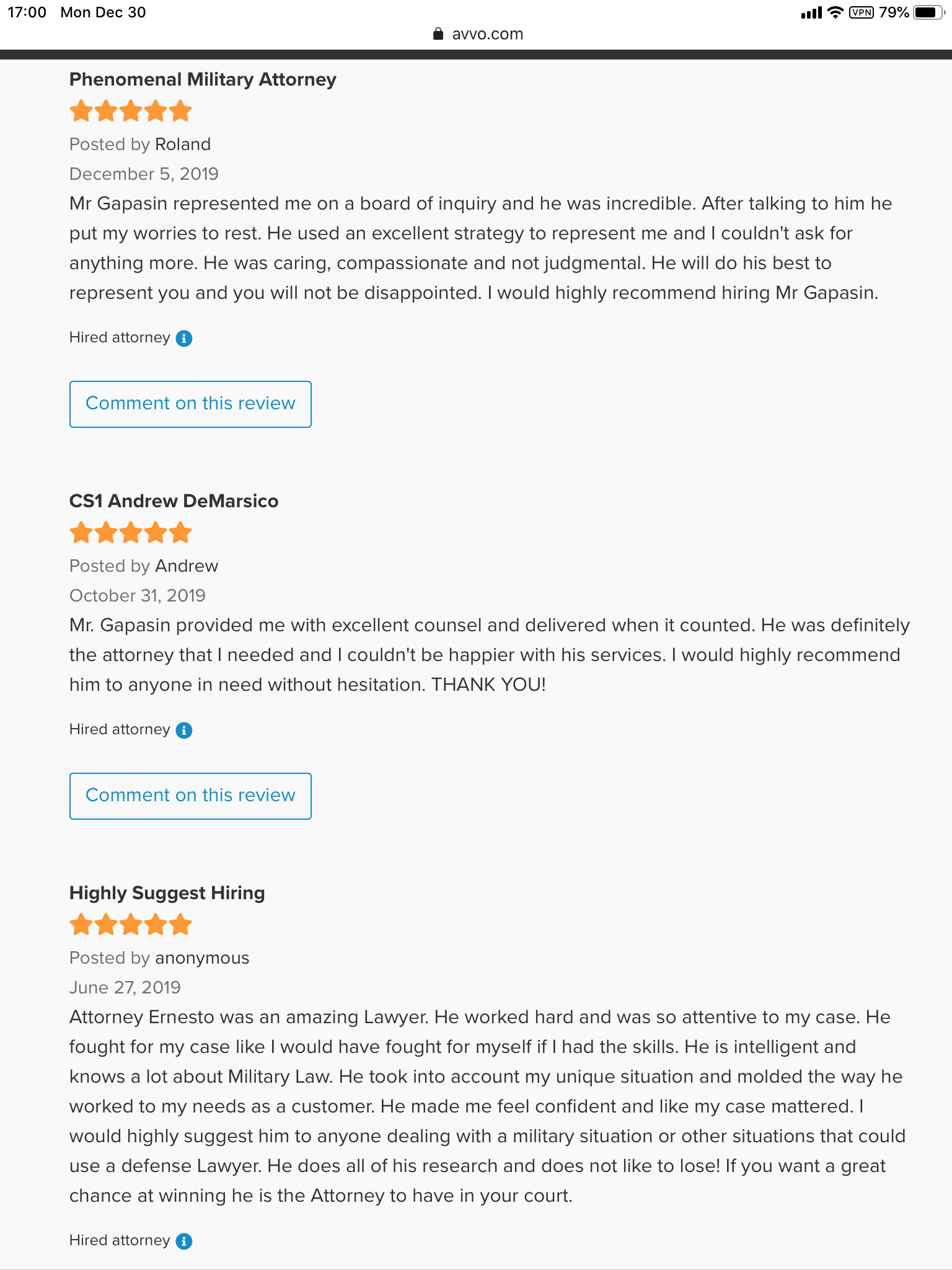 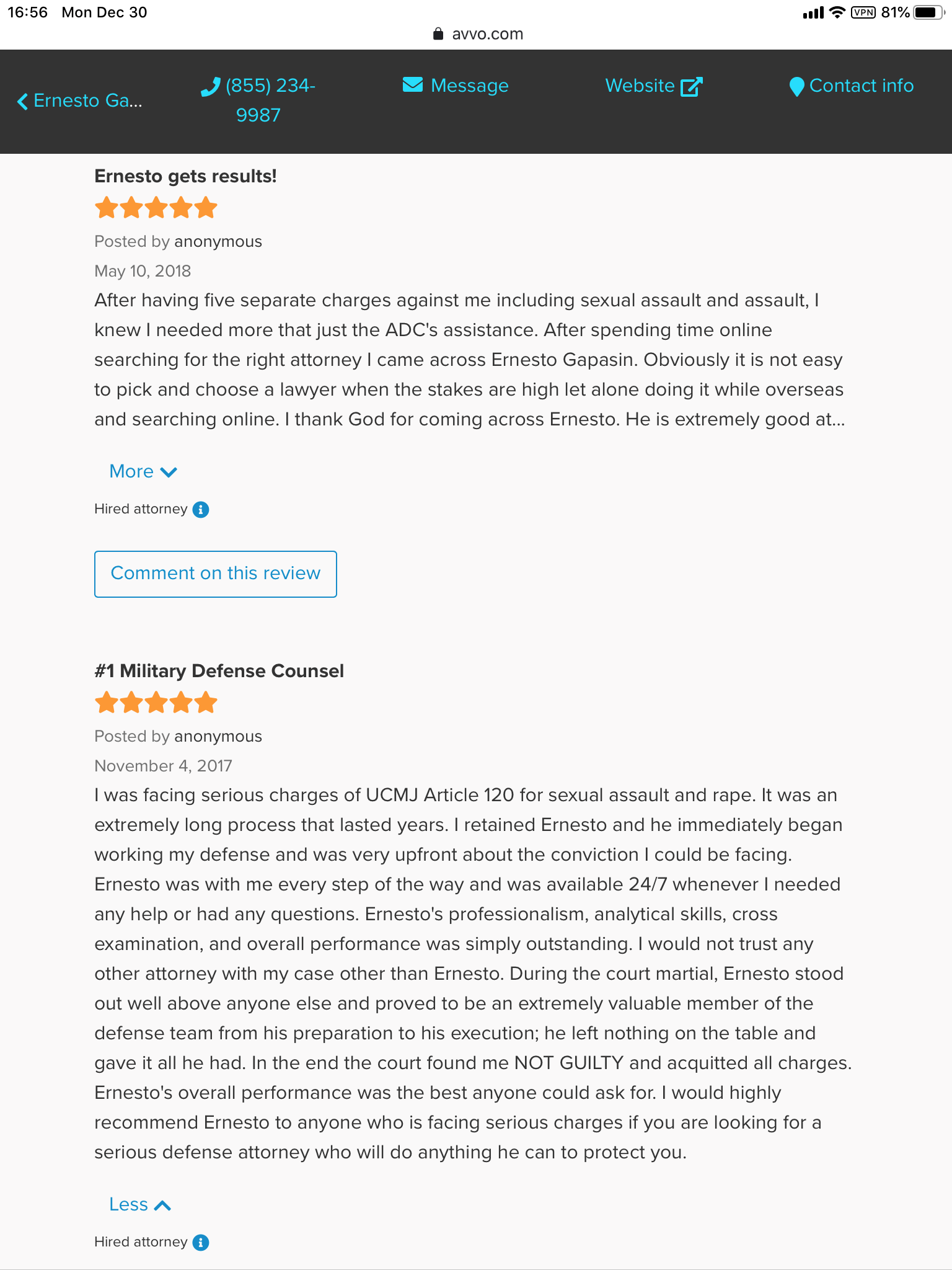 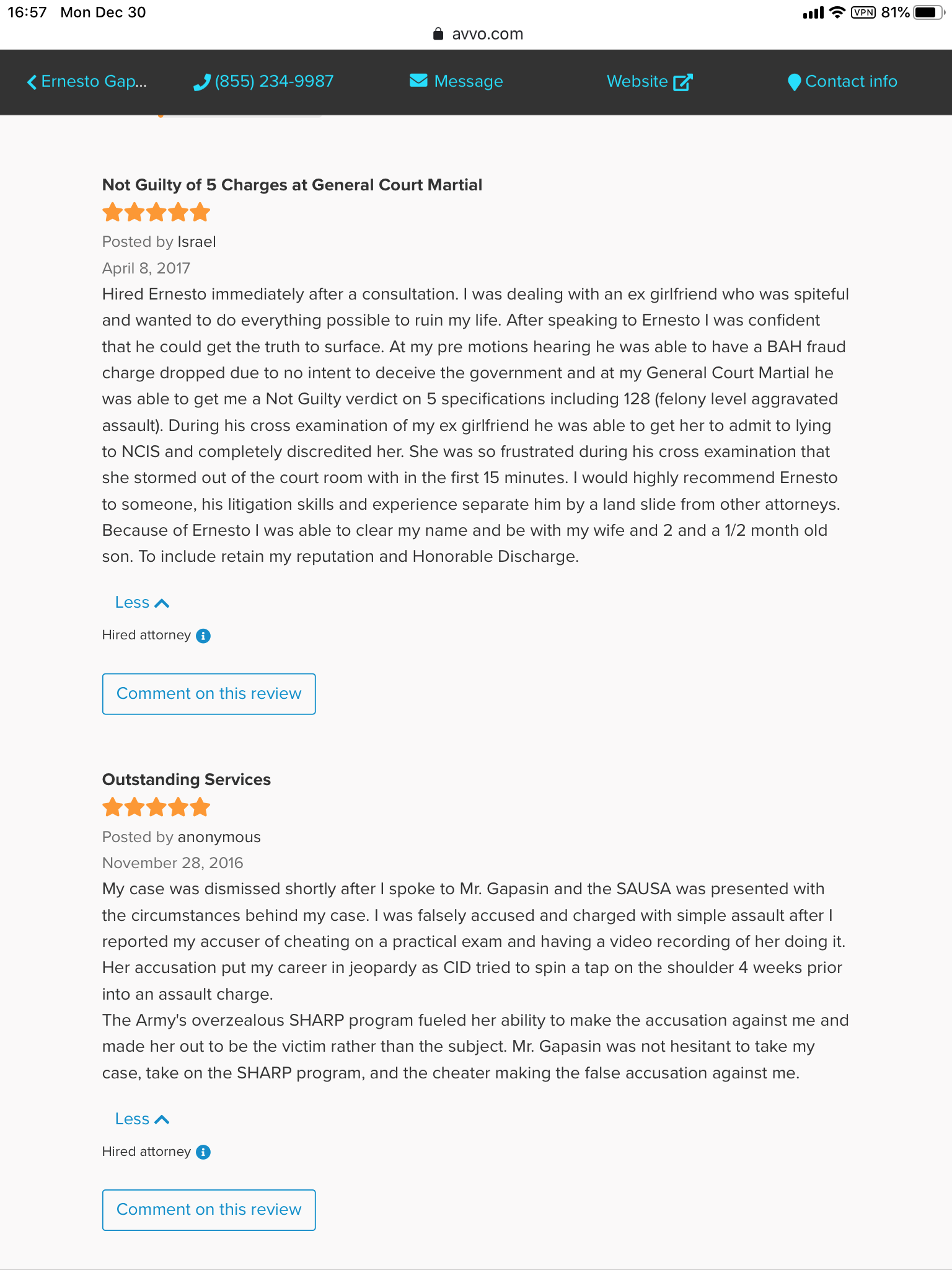 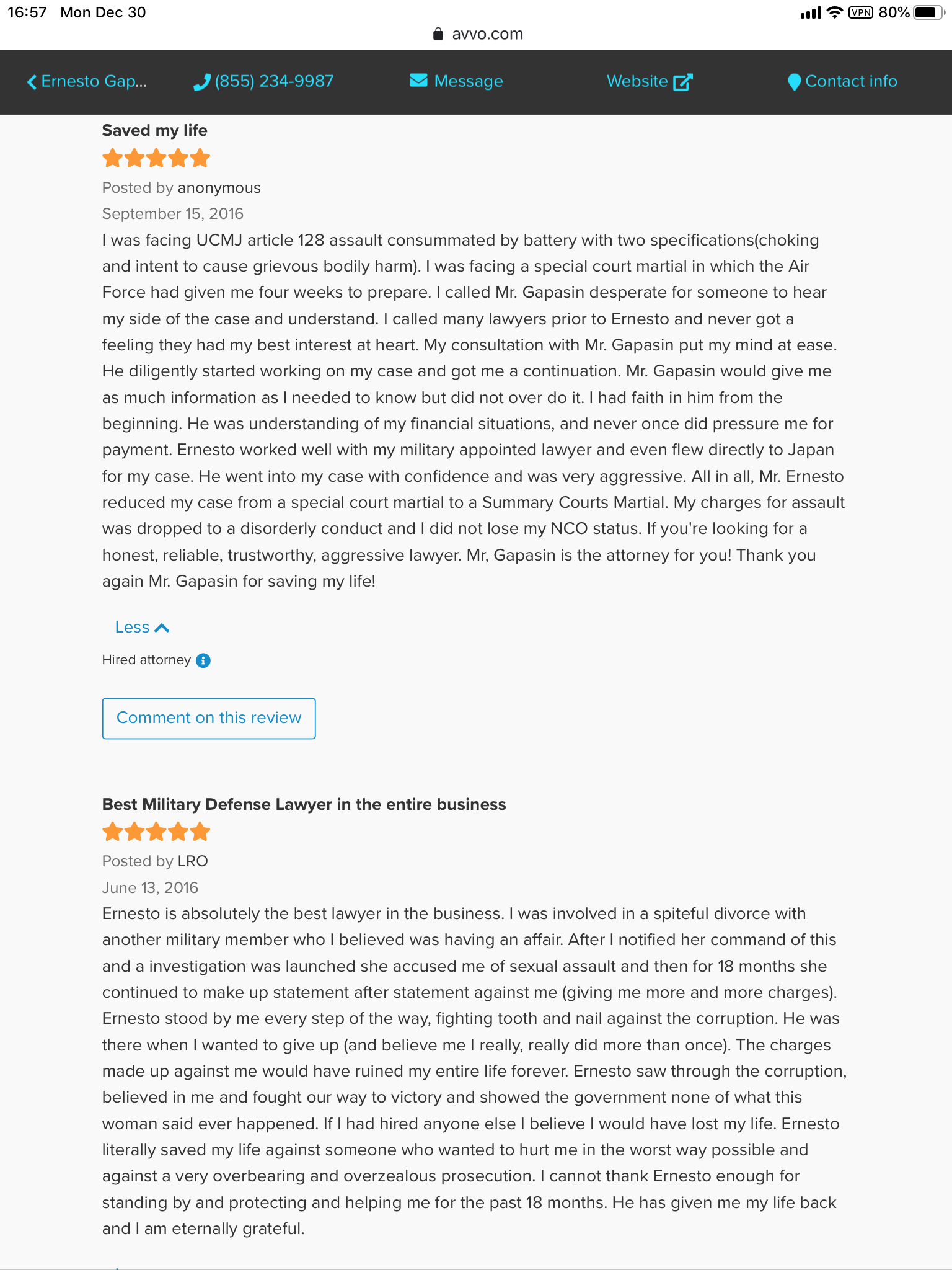 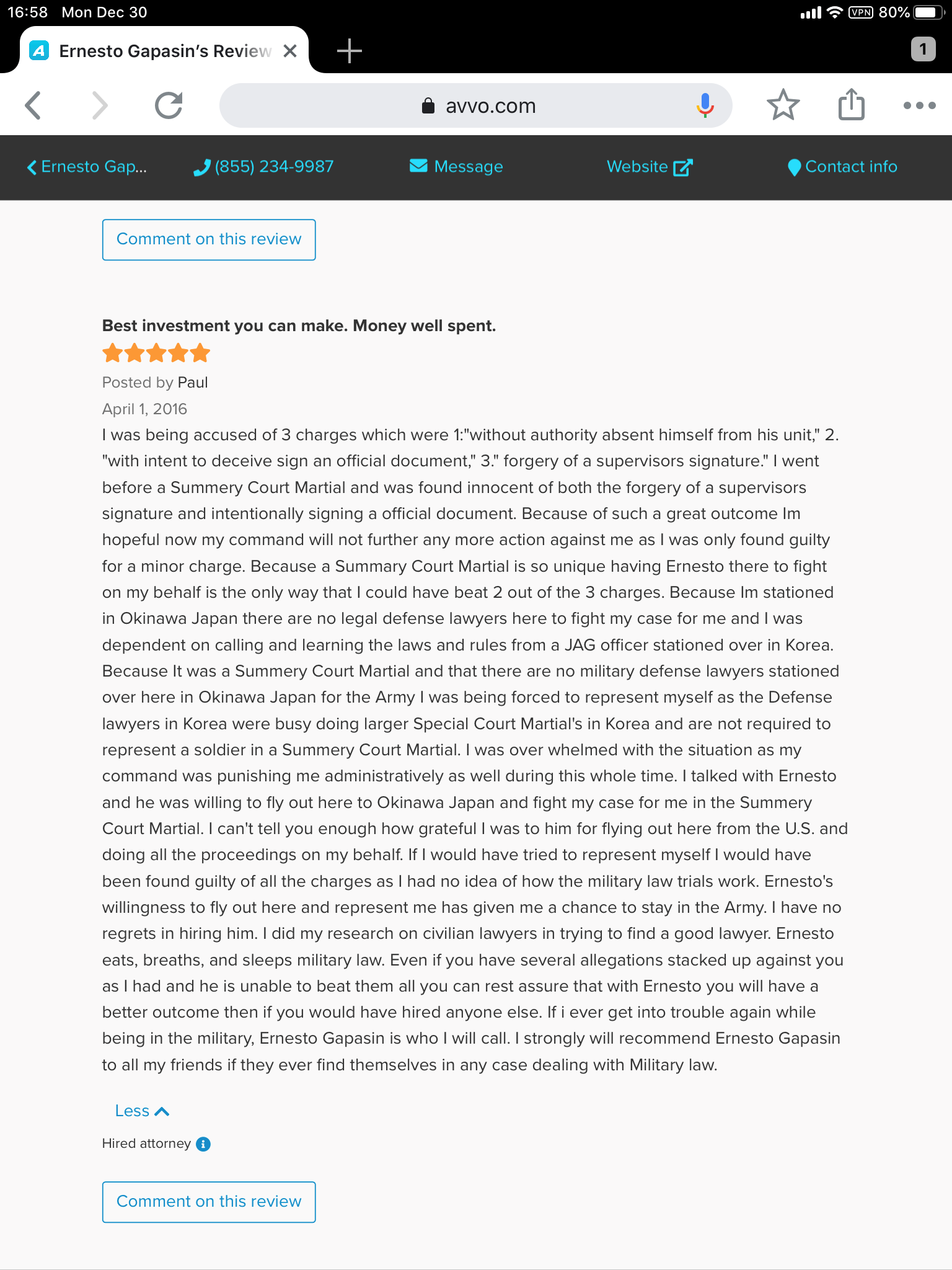 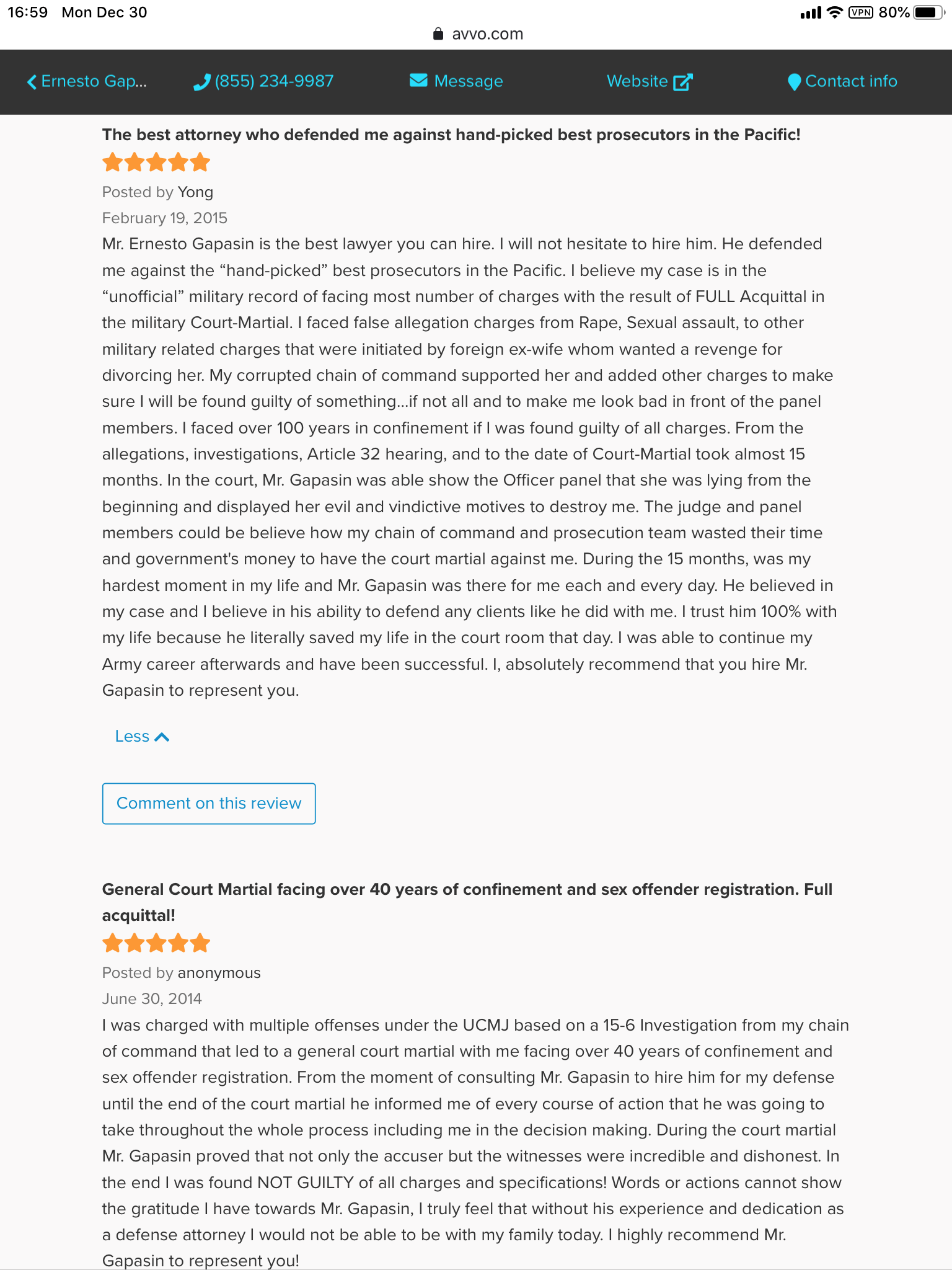 YOUR LOCATION DOESN'T MATTER.  WE REPRESENT CLIENTS WHEREVER THEY ARE STATIONED.

CLICK HERE to see Court-Martial Trial Results from 2008 to Today!! 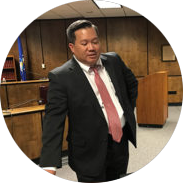 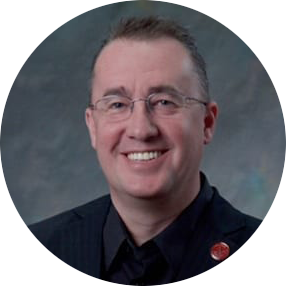 Will Worsham, Atty. at Law

“If You Are Serious About Hiring A Military Court-Martial Lawyer, Call Now Or Email Us For A Confidential Telephone Consultation.”

Look At These Past Results!

NOT GUILTY to ALL Charges of Sex Assault and False Official Statement. Gapasin reveals clear evidence that the accuser was in a fully-functioning "black-out state of mind" and NOT unconscious. Read More
NOT GUILTY of Rape. Prosecutors show Hallway Video of Accuser Running Out of Client's Dorm Room in Tears. However, Mr. Gapasin's Aggressive, Well-Prepared Cross-Examination Reveals Un-credible and "Consensual" Accuser. Read More
NOT GUILTY Of Rape and Sexual Assault.  Mr. Gapasin Aggressively Cross-Examines Accuser and shows her lack of credibility. Read More
Drill Sergeant found NOT Guilty After Gapasin Attacks Weak Forensic Evidence and Lays Out Credible, Reasonable Defense. Read More
NOT GUILTY of ALL 32 SPECIFICATIONS.  Officer and Enlisted Panel Find that Gapasin's client did NOT engage in Multiple Allegations of Fraud, Larceny and False Official Statements. Read More
NOT GUILTY of Sex Assault.  Gapasin Uses CID's Forensic Evidence and Accuser's Weak Testimony To Argue How the Government Fails Its Burden to Prove Officer Committed Sexual Assault. Read More
RETAINED.  Despite facing serious allegations of sexual assault and sexual harassment, Gapasin's client is RETAINED and Board of Officers find the allegations are UNSUBSTANTIATED. Read More

ERNESTO GAPASIN is a Military Lawyer who has been defending clients in trials for over 22 years.  The court-martial cases that Mr. Gapasin has litigated have been reported on by hundreds of media outlets across the country and around the world, to include: CNN, Fox News, Newsweek, The Washington Post, Rolling Stone, Time, USA Today, 60 Minutes, Stars and Stripes, Air Force Times, Army Times, Navy Times, Associated Press, The New York Times, the St. Louis Post-Dispatch, and the Las Vegas Review-Journal and Las Vegas Sun, among many others. 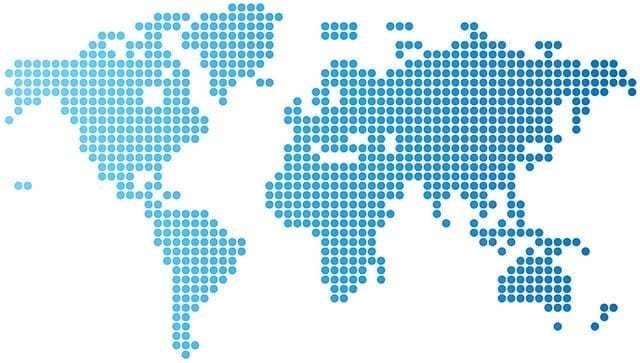 (Note: Your Location Does Not Matter. We Represent Clients Wherever The Military Is Stationed.)

The Best Defense Is An Early Defense. Having The Right Court-Martial Lawyer On Your Side From Day 1 Is The Key To A Successful Defense.

Are You Facing A Similar Legal Situation?

If so, call GAPASIN LAW GROUP so you know your rights and what to do when you are facing these life and career-threatening situations. Fill out the form to the left, click “Submit”, and we will call you shortly for your no-cost telephone consultation.

Remember, a quick plea deal may not be in your best interests, and may wreck your life down the road. Ask yourself: 5 years from now, when you look back on this decision to take the deal and not to fight the charges, is that a decision you're going to regret? The answer is almost always yes — especially when your free military lawyer forces you to take a deal you don't want. Call us. We will discuss all of your options with you, not just a guilty plea.

If you are facing an investigation or if you are pending charges for any of these offenses, whether it is for nonjudicial punishment (e.g., Article 15, Mast, Office Hours or a Summary Court-Martial), or for Special or General Courts-Martial, call GAPASIN LAW GROUP as soon as possible. Be warned, any mistakes you or your free, detailed military lawyer make early in the process will haunt you for the rest of the case. It is critical that you have experienced counsel right away.

“I was facing serious charges of UCMJ Article 120 for sexual assault and rape. It was an extremely long process that lasted years. I retained Ernesto and he immediately began working my defense and was very upfront about the conviction I could be facing. Ernesto was with me every step of the way and was available 24/7 whenever I needed any help or had any questions. Ernesto's professionalism, analytical skills, cross examination, and overall performance was simply outstanding. I would not trust any other attorney with my case other than Ernesto. During the court martial, Ernesto stood out well above anyone else and proved to be an extremely valuable member of the defense team from his preparation to his execution; he left nothing on the table and gave it all he had. In the end the court found me NOT GUILTY and acquitted of all charges. Ernesto's overall performance was the best anyone could ask for. I would highly recommend Ernesto to anyone who is facing serious charges if you are looking for a serious defense attorney who will do anything he can to protect you.” — 4 Nov 2017, posted on AVVO

(**Read other testimonials by clicking here or going to the “Resources” tab above, and then clicking on “Client Testimonials”).

You, your family, and your career are our top priorities. GAPASIN LAW GROUP will aggressively defend you to protect your rights, to win your case, and to give you your day in court. If you are serious about hiring a military defense attorney to defend you, call or email us now and we can discuss your matter privately and in confidence. We focus on winning tough cases.

Lesson Points:
1. Know when objections will be made in the trial, and know what objections should be expected for each item of evidence.

2. Diligently prepare well-thought out objections long before trial, always including the rule from the MCM along with any on-point cases if it exists.

3. Prepare a separate hard copy print-out of the expected objections and written-out arguments in its own separate section of your trial notebook or folder, always keeping it close and readily available to reference throughout the trial.