Composition of a Court-Martial 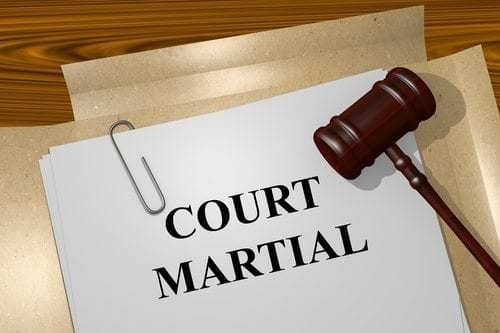 Composition of a Court-Martial

Imagine that you're walking into a courtroom for a court-martial. Who do you see? First, of course, you will see the defendant (the accused) and the plaintiff (the person bringing the case against the defendant). Typically both parties will have an attorney representing them as well. Military counsel is provided to the accused free of charge, but they can also hire a civilian attorney at their own expense or use both (a military attorney and a civilian attorney). In addition, a court reporter (employed by the convening authority) will be present to record the proceedings of the court-martial and the testimony given. If necessary, an interpreter may be present as well. Finally, witnesses may be called to provide evidence.

Beyond this, the composition of a court-martial changes based on the type of court:

As the lowest level of military court, the composition of a summary court-martial is unique. Unlike the two higher levels of court, the accused is not typically provided with legal representation free of charge. However, they do have the right to hire a civilian attorney at their own expense. In addition, a military judge is not present. Instead, a commissioned officer (typically a level O-3 or above) assesses the facts, studies legal precedents, reviews sentencing guidelines, and makes the verdict. If the accused is found guilty, this commissioned officer will also determine the sentence.

In a special court-martial, the intermediate level of court, there is a military judge and a minimum of three officers sitting on the panel (i.e., the jury). If the accused is enlisted, they can request that at least one-third of the panel consists of enlisted personnel. They can also request to be tried by judge alone.

A general court-martial, the highest level of court, also consists of a trial counsel, defense counsel, and a military judge, but the panel must have at least five officers. If the accused may be sentenced to death, there must at least twelve members. Again, an enlisted accused can request a panel composed of at least one-third enlisted personnel. They may also request a trial by judge alone. The judge of a general court-martial is designated by the Judge Advocate General (or his or her designee).