An Overview of the Court Martial Structure and Process 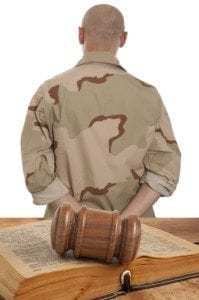 Court martial cases vary widely, and it takes a skilled military attorney to mount an effective defense. Our team of court-martial defense attorneys defends those accused of a variety of issues, including:

What is a Court Martial?

A “court martial” is a court that conducts military trials. There are three types of courts martial, and each type has unique requirements with regard to who acts as a judge or jury. Below is a brief overview of each type of court martial. Please refer to our blog for additional information.

This court deals with minor accusations of misconduct. The judge in this case is just one commissioned officer who may be a military attorney, depending on the policies and practices of that particular location. This type of court is severely restricted in the punishments that it can impose, and the accused must consent to be tried by a summary court martial.

This court will hear cases that are more serious in nature. It features a military judge and a minimum of three officers who act as a jury. If the accused is an enlisted service person, he or she can request that the panel consist of at least one-third enlisted military members. The accused can also request that the case is heard by the judge alone.

The Special Court-Martial cannot implement a sentence higher than one year of confinement. They are also restricted in the monetary sanctions that they can order, being limited to impose two-third's monthly basic pay for six months. However, they can impose a bad conduct discharge for enlisted personnel. Other lesser punishments are possible. An officer who is accused at this level cannot be confined or dismissed from service.

This is the highest court available in the military justice system, and it hears only the most egregious cases. There is a military judge and at least five officers who act as a jury. Like the Special Court-Martial, the accused can request a specific make-up of the officers if they are currently enlisted. The accused can also request that the judge hear the case alone, unless there is a potential for imposition of the death penalty. The penalties available at this level range from death to dishonorable or bad-conduct dismissal. Confinement and other lesser punishments are also possible.

The major difference between the General Court-Martial and the other forms of courts martial is that the General Court-Martial is required to hold an Article 32 Hearing prior to trial at this level. This is an investigative hearing where the investigating officer reviews all of the evidence and examines witnesses. Thereafter, the officer will submit a report to the commander who is administering the investigation. This report will summarize the hearing and include a recommendation as to whether the case should go forward or be dismissed. This hearing makes the entire process much more time consuming and costly, but it is required by the Uniform Code of Military Justice (UCMJ).

When a service person has been accused of a crime, the military will initiate an investigation. Usually, the accused's commander will head the investigation, but if the charges are serious military (or civilian) law enforcement officials may step in. The officer in charge of the investigation may take one of four possible courses of action after the investigation is complete:

The court martial itself can be held in virtually any location. They have been known to be convened in tents or makeshift facilities and can even be held aboard a ship at sea. Normally, however, they are held in the courtroom of a military base. Each branch of the military has their own circuit court. The Army, for example, has six circuits while the Air Force has five trial circuits. The Navy and Marines share six circuit locations. The Coast Guard has nine districts. Each of these is centrally located to serve specific geographic regions. They can be found both within the United States and on military bases in foreign countries.

Regardless of the location, our team of experienced military court martial lawyers can help. If you have been accused of misconduct, you have the right to engage a civilian lawyer to represent you. We encourage you to contact us immediately. Call 1-(888) 919-8265 , use our online chat feature, or e-mail us at [email protected]. You can also use our contact form here. No matter where you are around the world, we are here for you.