Although all employees are required to perform certain duties, in the military, service members must perform assigned duties and follow given orders by law. Failure to do so is a crime outlined in the United States Code of Military Justice (UCMJ) and known as dereliction of duty. The specific offense also includes service members who have incapacitated themselves in such a way that they cannot perform their duties (for example, falling asleep on duty, drinking on duty, shooting oneself, etc). To learn more about the definition of dereliction of duty, elements of the crime, and potential punishments, please scroll down. 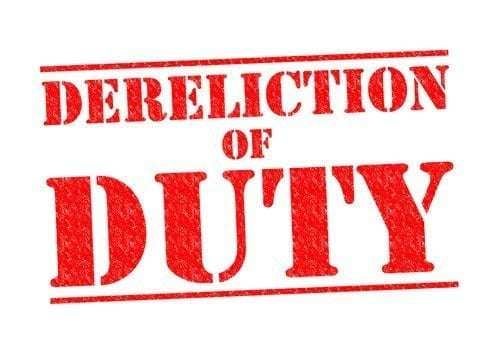 Article 92 of the UCMJ addresses dereliction of duty. It applies to any service member who “(1) violates or fails to obey any lawful general order or regulation; (2) having knowledge of any other lawful order issued by a member of the armed forces, which it is his duty to obey, fails to obey the order; or (3) is derelict in the performance of his duties” (source).

The prosecution will seek to prove beyond a reasonable doubt that (1) the accused knew (or should have known) his or her duties and that (2) the accused was derelict in the performance of those duties due to negligence or inefficiency without just cause. They may seek to show the existence of the duties through a treaty, statute, regulation, lawful order, standard operating procedure, or custom of the service. In addition, the prosecution may attempt to prove that the accused had knowledge of these duties through regulations, training, operating manuals, academic literature, testimony of the accused's peers, and customs of the service.

Dereliction of duty is a serious offense that can have dire consequences, especially during wartime. So if you or someone you know is preparing for a court-martial due to an accusation of dereliction of duty, contact the top-quality lawyers at Newsom & Gapasin.

Whether you're under investigation, facing a court-martial, or seeking an appeal, our experienced and aggressive law firm would be happy to help. We focus on winning tough cases, some of which have been reported on by national media outlets like CNN, Fox News, Time, the Washington Post, and the New York Times. For more information, please give us a call at 1-(888) 919-8265 , send an e-mail to [email protected], or click here to contact us online. We look forward to hearing from you!