What is the Uniform Code of Military Justice?

When military service members are accused of a crime, they use a specialized military justice system that is based on the Uniform Code of Military Justice (UCMJ). What is the Uniform Code of Military Justice? It is a system that works very much like the civilian justice system, but it is completely separate. It covers most members of the military and those in the military reserves while they are on active status. It may also cover certain retired military personnel, prisoners of war, and students at military academies. To learn more about this justice system, please scroll down. 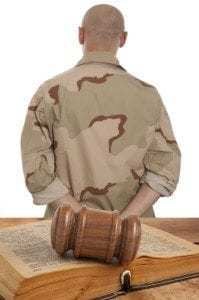 What is the Uniform Code of Military Justice?

Some crimes are exclusively based on military conduct, while others are covered under both military and civilian law. However, regardless of the accused crime, if the alleged perpetrator is a member of the armed services and the incident occurred on a military base, then the Uniform Code of Military Justice will likely apply.

The Uniform Code of Military Justice is a set of federal laws that was enacted by Congress in 1950. It provides a uniform set of rules for all branches of the military. Prior to its enactment, each branch functioned slightly differently, and certain branches occasionally received unfair treatment compared to the other branches. The UCMJ also created more rights for those accused of military crimes, including:

The UCMJ gave military personnel most of the rights that citizens of the United States enjoy in their separate military court system.

Types of Courts Under the UCMJ

Summary Courts-Martial deal with minor crimes, and they are only allowed to inflict some of the most minor penalties. This court only involves one commissioned officer as the “judge.”

Special Courts-Martial address crimes that are usually considered misdemeanors in civilian court. This court has one military judge and three enlisted members, but the accused offender can also request to be tried by the military judge alone. It is possible to be discharged for bad conduct at this level.

General Courts-Martial deal with the most serious crimes, including mutiny and serious civilian crimes, like murder. This is the highest military court available. It includes one military judge and at least five enlisted members, but like in a Special Court-Martial, the accused can request that the military judge alone hear his or her case. This court can use any punishment that is allowed under the UCMJ, including the death penalty.

There is no simple answer to the question, “What is the Uniform Code of Military Justice?” It creates a huge body of law that the military justice system must follow, it establishes the court system and gives the accused rights, and it specifically states what each court can and cannot do. For more information, give Newsom & Gapasin a call at 1-(888) 919-8265 or e-mail us at [email protected] You can also look at our FAQ page for more information. We are available around-the-clock to support our service members.